Head of Xbox, Phil Spencer, has stated that he is “definitely not done” with acquiring more studios for Microsoft in order to improve the Xbox Game Pass. This comes after the recent acquisitions of Bethesda and ZeniMax Media. With these new additions, the Xbox Game Pass now has over 100 titles.

It is clear that Spencer is committed to making the Xbox Game Pass even better than it already is. With more acquisitions on the horizon, it is exciting to see what the future holds for the Xbox platform.

Xbox head Spencer has said that the company is “definitely not done” acquiring more studios. This comes after the recent acquisition of Bethesda, which brought many popular franchises such as Fallout and The Elder Scrolls into the Xbox family.

Spencer did not give any specifics on which studios Xbox might be interested in, but he did say that the company is always looking for opportunities to bolster its first-party lineup. This is good news for Xbox fans, as it suggests that the company is committed to continuing to invest in exclusive content.

The acquisition of Bethesda is a big win for Microsoft, and it will no doubt have a positive impact on the Xbox brand. However, Spencer is right to say that Xbox is not done acquiring studios. There are still many talented developers out there, and Xbox would be wise to continue to add to its stable of first-party studios.

Since the launch of the Xbox One, Microsoft has been on a mission to acquire new studios and talent. The most recent example is the purchase of Bethesda Softworks, which brought beloved franchises like The Elder Scrolls and Fallout into the Xbox family.

There are a few reasons why Xbox might be interested in acquiring more studios. First, it gives the company more control over the gaming ecosystem. With its own studios, Microsoft can create exclusive games that can only be played on Xbox consoles. This gives gamers a reason to choose Xbox over its competitors.

Second, owning its own studios gives Microsoft more flexibility when it comes to releasing new games. The company can choose to release games on its own schedule, rather than waiting for third-party studios to finish development.

Lastly, acquiring new studios allows Microsoft to tap into new talent and ideas. By bringing new studios into the fold, Microsoft can expand its portfolio of games and appeal to a wider audience.

So, while some might think Microsoft is done acquiring studios, it’s clear that there are still plenty of reasons why the company might be interested in adding more talent to its roster.

What This Could Mean for the Future of Xbox

As the head of Xbox, Phil Spencer has a lot on his plate. But that doesn’t mean he’s done acquiring new studios. In fact, he says he’s “definitely not done” with expanding the Xbox family.

This is good news for Xbox fans, as it means the company is committed to continuing to invest in first-party content. Spencer has said in the past that he believes first-party games are essential to the success of a console, and it’s clear that he’s putting his money where his mouth is.

So far, Xbox has been on a bit of a spending spree, acquiring studios like Ninja Theory, Obsidian Entertainment, and inXile Entertainment. And it looks like they’re not done yet.

This is good news for gamers, as it means there will be more high-quality Xbox exclusive games to look forward to in the future. It’s also good news for the developers who are now a part of the Xbox family, as they can be assured that their studio has a bright future ahead.

So what does this mean for the future of Xbox? Only time will tell, but one thing is for sure: Phil Spencer is not done expanding the Xbox family.

How This Could Impact the Gaming Industry

In an interview with The Washington Post, Xbox head Phil Spencer said he’s “definitely not done” with acquiring more studios. This could have a big impact on the gaming industry, as Microsoft has been on a bit of a spending spree lately when it comes to studios.

The most recent acquisition was that of Obsidian Entertainment, which was announced just last week. Prior to that, Microsoft had also bought up Playground Games, Ninja Theory, and Compulsion Games. With all of these new studios, Microsoft now has a total of 15 first-party development studios.

This is a big deal because it gives Microsoft a lot more first-party content to work with. First-party studios are important because they create games that are exclusive to a particular console. This is a big selling point for consoles, as many gamers are willing to buy a console just to play certain games.

Microsoft has been investing a lot in its first-party studios lately, and it’s clearly paying off. The company’s latest console, the Xbox One X, is the most powerful console on the market. And with all of these new studios, Microsoft is in a good position to continue making great exclusive games for the Xbox One.

So what does this mean for the gaming industry? Well, it could mean that we’ll see even more exclusive games for the Xbox One. Microsoft has the money and the studios to make this happen. And given the success of the Xbox One X, it’s clear that there is a market for powerful consoles with great exclusive games.

This could also mean that we’ll see more studios being acquired by Microsoft. The company has shown that it’s willing to spend money to get the studios it wants. And with Spencer saying that he’s “definitely not done” with acquiring more studios, it seems likely that Microsoft will be making more acquisitions in the near future.

So what does this all mean for the gaming industry? Only time will tell. But one thing is for sure: Microsoft is a force to be reckoned with, and it’s only going to get stronger in the years to come.

In an interview with IGN, Xbox head Spencer said he is “definitely not done” with acquiring more studios. This comes after the recent acquisitions of Bethesda and Obsidian. When asked about what other companies might be doing in response, Spencer said that he thinks they are “watching and waiting.”

It’s no secret that Xbox has been on a bit of a spending spree lately. They’ve acquired some of the biggest names in the gaming industry, including Bethesda and Obsidian. This has led many to wonder what other companies might be doing in response.

Spencer says that he thinks they are “watching and waiting.” It’s possible that some companies are waiting to see how the acquisitions pan out before making any moves of their own. Others may be trying to figure out what Xbox’s long-term plans are.

Only time will tell what other companies do in response to Xbox’s recent acquisitions. For now, we’ll just have to wait and see.

Phew, that was a lot of speculation. But hey, that’s just our opinion. What do you think? 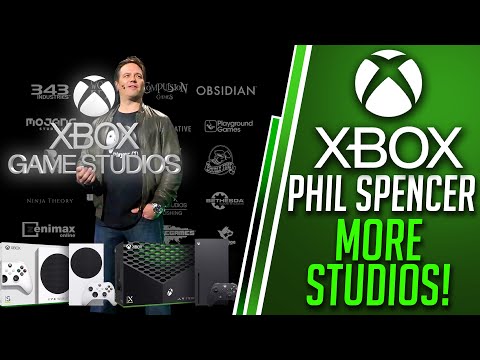